Return To All Articles

What is Rater Bias?

Businesses create processes and standards by which their employees are measured against to ensure that employees understand their role and job function, are competent in that role, and ultimately are an asset to the organization. This process is typically referred to as performance management. The idea of performance management and a review process is theoretically a good one. The best way to measure an employee’s performance is by asking their managers, peers, and subordinates how exactly the employee is performing in their job, what they can improve upon, and what they have mastered. Performance reviews can sometimes go as far as to determine when someone is up for a promotion or a raise - although tying reviews with compensation can be tricky (more on that in another blog).

This type of feedback process for an employee can be very enlightening, and to the employees that are looking to continue growing in their position - are often welcomed. However, there are a few things to look out for when working through employee evaluations and those come in the form of Rater Bias.

Humans are not able to shrug off bias, we all have it and it impacts our judgement and decision-making ability on a daily basis. While bias can’t simply be shut down, we can be aware of our implicit (or explicit) bias and how that may impact our judgement on others - especially when it comes to performance reviews. Performance reviews are such an important part of growth and give the evaluator and evaluatee an opportunity to grow, learn how to communicate for effectively, and provide constructive feedback that will ultimately bolster the working relationship. Since performance reviews often are a source of anxiety for those being reviewed, it is important to become more aware of how Rater Bias can affect an outcome for an employee and color the vision of an evaluator.

The more aware that people are about these common bias’, the more likely they are able to combatted and ultimately, understood, when it comes to performance reviews.

Two sides of the same coin. These two biases are similar in that they produce the same effect: an incorrect performance review, but one is overwhelmingly positive for the employee, while the other is negative. The Halo Effect happens when an evaluator finds a positive attribute in the person being evaluated and then continues to rate the employee higher in all areas leading to an overall positive review. The Horns Effect, is the opposite. The evaluator uses something that the person being evaluated is not as strong in to dictate how they score all the rest of the attributes in the performance review process, leading to an overall negative review.

Aside from the blatant issue that these biases can have a compounding effect on an individual’s review, it also goes to say that evaluating someone across the board as “good at everything” or as “needing improvement” in everything doesn’t help to provide a basis for decision making or at minimum helping the employee better understand what he/she can improve upon in the future.

The Leniency and Strictness biases are similar to the Halo & Horns Effect in that they are opposite. While the Halo & Horns Effect has to do with the employee being evaluated and their attributes, the Leniency and Strictness biases have to do with the person who is evaluating. In these two scenarios, either the evaluator is particularly lenient or strict in the way that they approach their evaluations. While this may not be easy to spot when looking at the reviews they complete individually, when taking into account their reviews as a whole, across multiple employees, their reviews are either too harsh, or too easy-going in general. These types of biases can play out in the long term for employees that do not get promoted because of a strict manager, or employees that do get promoted based on lenient reviews and now fall short in skills that they have been reviewed as “mastered.”

Again, this type of bias has a negative effect overall in that the feedback is not transparent and is not grounded in the actual performance of the employee but rather by the attitude about performance reviews by the evaluator.

An effective measure in combating the Leniency or Strictness Bias is through calibration efforts. While calibration can be time consuming, the efforts are quick to reveal where employees may be unfairly reviewed especially by supervisors that are overly lenient or strict in their approach to reviews. By bringing together all managers in the review process, and opening up the process for others to comment on how they reviewed an employee, input can be gathered by other managers that do not oversee that employee and how they would rate them. This allows for multiple people to agree on the evaluation of an employee so no one is subject to lenient or strict bosses. 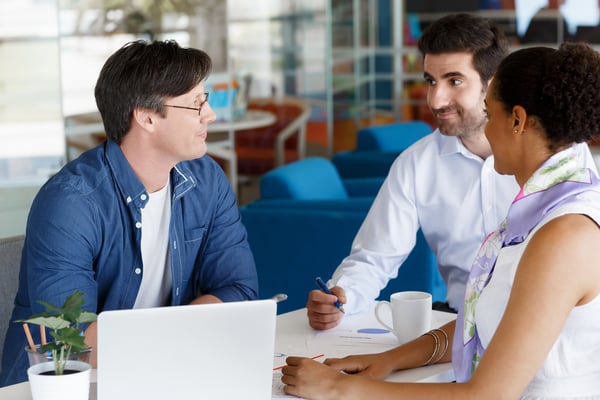 The Contrast Effect is when an evaluatee is being compared to another employee during the process. For example, if one employee is particularly good at time management, that person may be the stick by which everyone else is evaluated. So even when someone else is good at time management, their rating is lower because they are not as good as the highest rated employee. This ultimately has an adverse effect on an employee’s overall rating and is not a fair way to evaluate performance - especially for those that are not the best within a certain attribute.

While it’s fair to continue to work at growing individual’s skills through constructive criticism, it is not appropriate to suggest someone needs to improve simply because they are not as good as someone else. Instead, performance reviews should be used to point out areas of weakness (and improvement) in an employee.

The Similarity Effect refers to people’s propensity to favor those that are similar to themselves. Meaning, that during the evaluation process, evaluators are likely to look more favorably upon people that are similar to themselves. This does not only take play for a person’s attributes, such as time management, organization, or initiative - but also rears its head for things that an employee has no control over - think sex, race, etc. This effect needs to be carefully monitored because it can come off as discrimination and have long-lasting effects on those being evaluated, especially if the person that is perpetuating this type of bias is a manager or supervisor.

Calibration can be an effective way to combat the effects of the Similarity Bias, as it holds that evaluators accountable to how others in an organization would rate the same employee. It’s also worth more of a conversation if this bias is obvious when comparing ratings from the same reviewer.

The last bias that we will mention for now is False Attribution Error. This bias comes about when a reviewer believes that an employee is in complete control of their successes or failures. For example, rating an employee negatively on a project in which they worked within a group. Performance, for better or for worse, is controlled by more than just the employee hem/herself and is also the result of the system he/she works within. Attributing success and failure as a direct correlation to the employee’s individual effort alone does not paint a fair picture of all the factors that can affect performance (both positively and negatively).

Another way to combat bias is by investing in Performance Management software where teams are able to review employee ratings to determine whether or not these bias’ are coloring the vision of the rater. Making decisions about who is promoted, who is getting a raise, or who needs to be let go is best when done off of solid data that has been gathered about the employee - however, making decisions off of incorrect data (that has been compromised by bias) ultimately leads to making the wrong decisions. Taking control of your performance management process with software will help your teams start recognizing bias and improve the data collection process to better your team’s abilities and help improve performance reviews across the board.

Join the thousands already experiencing the benefits of the VAIRKKO Platform. Request a product demonstration to see for yourself what our cloud solutions can do for you.